In recent months we noticed a major uptick in Human Capital mentions of 450%. The rise can be attributed to the political climate as well as corporate action to get ahead of potential regulations. Mentions on our platform are largely centered around major corporations such as Amazon, Walmart, and Costco. We explore some of the news headlines that stood out. 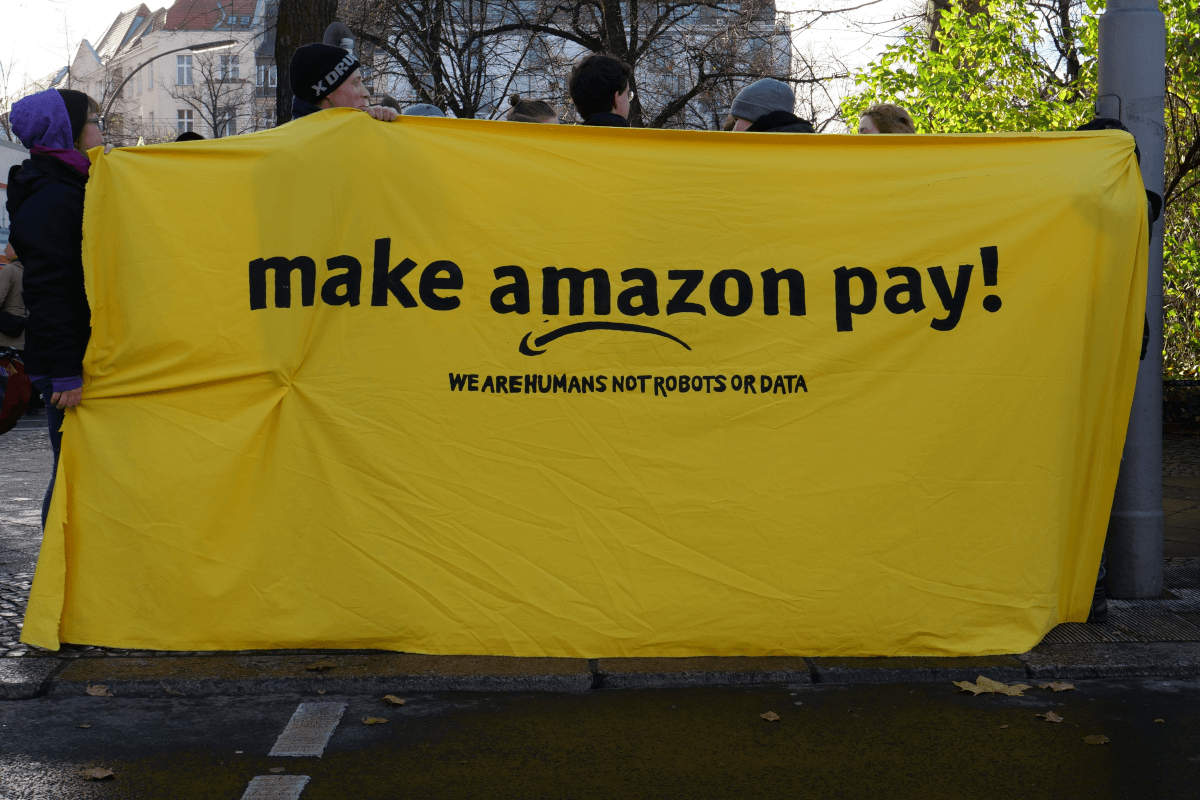 Amazon made its internal minimum wage $15 per hour in 2018, putting them well ahead of some of their competitors at the time. Recently, though, another subtheme of Human Capital has emerged as an issue: unions.

In November there were reports that Amazon was spying on their employees to monitor talk of union activity online with the help of Pinkerton agents, who have now become involved with cybersecurity. These are the same Pinkerton’s who became infamous for quelling union activity nearly a century ago. In our December article on Amazon’s climate efforts we mentioned that there could be possible risk in the pipeline on the matter. Now it appears that risk will come to the forefront when their warehouse workers in their Bessemer Alabama location vote on whether to unionize. This is the first major unionization vote for Amazon since 2014.

Amazon more recently ran anti-union ads that were removed by their own subsidiary, Twitch. The streaming platform Twitch, removed these ads citing a no politics policy.

We would be remiss to suggest that Amazon is the only company with issues when it comes to unions. Tesla and Walmart have also taken stances against unions in recent years. While Amazon and Walmart do not have any employees currently represented by unions, Costco has some members represented by the Teamsters Union.

New SEC disclosure rules for Human Capital and the imminent appointment of Gary Gensler as SEC chair, will provide further regulatory scrutiny for large corporations. New SEC guidelines require disclosure of Human Capital resources for companies, but only to the extent that they are material. Under these guidelines it would be up to a company’s discretion on what to include and what not to. Stronger measures could be put in place that would provide more robust instruction on disclosure.

The minimum wage push in the Senate seems to be losing steam, but another major policy factor is the support of unions by the White House. Just this week President Biden threw his support behind the Alabama warehouse workers for Amazon, making his stance clear on the issue by stating “Every worker should have a free and fair choice to join a union.”

Amazon has set a standard for internal pay that was further along than its peers up until very recently. Amazon has also been lobbying the government to raise the minimum wage. Walmart, a major competitor of Amazon’s has announced a raise in wages for 425,000 employees but refused to make a commitment of $15 per hour as a minimum baseline. Walmart’s baseline starting rate will remain at $11 per hour. Costco on the other hand has committed to raising their internal minimum wage to $16 per hour.

Minimum wage is only part of the equation in developing a more equitable working environment for the lowest earning strata. It is telling that companies are quick to raise wages but are so adamant when it comes to unions. With a president keen on helping unions return and a new SEC chairman who will potentially seek stronger disclosure for corporations, this is shaping up to be a big year for labor. All eyes are on Alabama as Amazon employees at the Bessemer facility get ready to vote on unionization.

We'll be presenting at AI and Data Science in Trading, March 15-16, Online

Join Amenity Analytics virtually in our panel discussion, Data-Informed Insights: In-house vs. Outsourced. Partnering with Amenity means being set up for success. You don't have to choose if you have the right provider. Amenity is the architect working with you throughout the entire process. Plus we give you the keys when we’re done.

Visit the AI and Data Science and Trading Conference website to register.